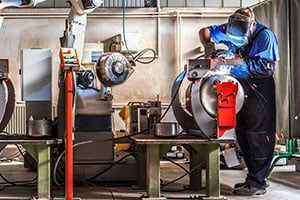 Whether it’s in the task of assembly or disassembly, pick and place or product inspection, the use of industrial robots and artificial intelligence (AI) technologies within the electronics manufacturing environment looks set to play an increasingly prominent role.

Robots on the rise

As industrial robots become faster, smarter and cheaper to produce, more companies are seeking to integrate these highly capable new forms of automated technology into their manufacturing environments.

Over the last several decades, the contribution of automation within electronics manufacturing has brought with it a wealth of positives across the entire production lifecycle.

There has been the opportunity for businesses to drive greater efficiency through increased production capacity and the reduction of costs.

The speed and precision of robots is also difficult for traditional manual labour methods to match.

When robots have the edge

With their robust combination of micro-sensors and impressive computing power, robots can detect the tiniest of details in the most unpredictable of environments. They can select and precisely place components, they can build subassemblies, connectors, display screens and other delicate items - and they handle a vast array of automated tasks from populating PCBs, to applying sealants and testing complete systems.

Repetitive and monotonous tasks have proven to be especially suited to the robot workforce, where there is no risk of distraction, apathy or lack of attention no matter how mundane the activity or how long the working day.

Will the robots triumph

But hand-in-hand with these powerful new technological advancements, there is also the very real fear that intelligent robot technologies may one day usurp the role of human workers altogether.

While electromechanical systems might appear set to dominate the workplace, there is still much to be said for not just maintaining but prioritising the role of “people-power” in the electronics manufacturing environment.

One thing that has become clear is that electronics manufacturing processes aren’t necessarily better just because they are automated.

What’s more, there are also some significant areas where humans continue to out-perform their robot counterparts.

Clash of the titans: 4 ways humans are better than robots

Despite their strength and speed, robots can still easily be surpassed by humans when it comes to dexterity. Ironically, while robots can perform many tasks that humans find difficult, they can frequently fail miserably when faced with the simplest of tasks.

It’s a paradox that was predicted by Hans Moravec back in the 1980s, when he and his fellow researchers compared the instinctive sensorimotor skills of humans with those of robots.

As Moravec and his colleagues explained, while artificial intelligence would frequently have the edge when it came to solving advanced logical problems, it could also easily come unstuck when faced with completing simple human skills, and particularly those that require perception, movement or speech.

Over the past four decades, those working within the field of AI have sought to overcome many of these challenges. There have been multiple milestones in industrial automation, with higher-level AI now beginning to replicate many of our human evolutionary abilities, especially so in the areas of image processing and voice recognition.

But many of our modern day manufacturing processes continue to rely on a precise combination of innately human fine-motor skills which even the most expertly programmed of industrial robots can struggle to achieve.

While robot technology has advanced to the extent that it can perform a great range of skills at high speed, it can quickly come unstuck when faced with the unexpected.

Although they may excel at carrying out tasks in controlled environments for example, industrial robotics can easily falter when asked to handle unfamiliar objects or when placed in uncontrolled conditions.

A human can improvise, collaborate or follow a degree of gut instinct, but a robot’s ability to cope will always be limited by the parameters of what it has been programmed to understand.

The ability for strategic thinking is another innately human trait. Sure, a computer programme can gather together a wide variety of data, but more often than not it takes a human to make sense of that data and to craft it into a cohesive plan.

If there is one area where humans continue to surpass robotic systems it’s in our ability to innovate and collaborate. While a robot is programmed to follow a set of instructions, this inevitably means there is no room for improvisation.

A bottleneck in the production process has the potential to stop a robot in its tracks. A human meanwhile can spot inefficiencies in a manufacturing process and use their creative thinking skills to resolve the problem - from something as simple as how items are positioned on a shelf to increase efficiency, to the nurturing of relationships with key suppliers to strengthen and safeguard the supply chain.

While the increased reliance on technology within manufacturing is undeniable, the role of humans is key.

And as long as there are robots fulfilling a range of tasks there will also be the need for humans to monitor, maintain and repair these powerful machines to ensure they remain in peak working condition.

Few would doubt that automation looks set to play a key role in the future of the electronics manufacturing industry. But while automated systems may excel in certain areas, the value of the human factor is undeniable.

When it comes to those innate and instinctive abilities such as empathy, strategy and creative thinking, the human brain will always have the edge.

And no matter how sophisticated a robot’s technology or how effectively it is able to apply its learning to new situations, its future success is reliant on the resourcefulness, the adaptability and the innovation of the people that created it.