Tackling the UK's manufacturing skills gap - why we must act now 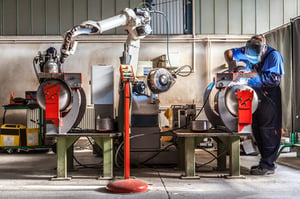 The manufacturing skills gap in the UK has been well-documented. But recent research has revealed just how urgent the crisis is. According to the Annual Manufacturing Report 2020, British manufacturers are facing the largest shortage of skilled workers since 1989, with many citing this as their biggest challenge.

While advancements in Industry 4.0 technologies have brought swathes of innovation to the sector, ultimately, it’s having people with the right skills to harness these new technologies that will be key to driving the industry forwards.

The UK is currently the ninth largest manufacturing nation in the world. Britain’s manufacturers employ 2.7 million people - earning an average annual salary of £32,500. Yet the sector is currently facing the largest shortage of skilled workers in 30 years.

In late 2018, 81% of UK manufacturers admitted they struggled to find people with the right experience and qualifications to fill vacant roles. At the time, Brexit was largely blamed for exacerbating the already pressing issue. But in 2020, more than half of manufacturers say their attitude to growth is unaffected by political and economic uncertainty.

So what’s behind the skills gap?

The first problem is that experienced workers are retiring faster than new workers are entering the industry. Manufacturing still appears to be low on the list of career options  young people want to pursue. This is in part due to an outdated perception of the industry, which is often seen as old-fashioned, monotonous and low-paid. Not to mention male-dominated.

It’s a curious paradox, given one of the primary reasons manufacturers require greater skills is because they are adopting advanced technologies, such as 3D printing, robotics, and artificial intelligence. These are all areas that are otherwise seen as exciting and financially rewarding. So why the mismatch?

The need for high-tech skills is another factor contributing to the skills gap. A 2019 BCG study found that job positions requiring IoT, cloud and machine learning skills are increasing 20% year on year. The trouble is, there just aren’t enough people with the right skills to meet the growing demand.

The impact on manufacturing growth

If the skills shortage continues, there may be damaging consequences for UK manufacturers, from reduced productivity to increased operational costs, and an inability to meet consumer demand. Ultimately, it will have a serious impact on manufacturers ability to stay competitive in the market.

In an attempt to bridge the skills gap, many companies are choosing to automate basic, non-value add processes to allow for employees to upskill and retrain in areas such as machine learning, software development and SQL.

In fact, 86% of manufacturers have in place a policy for upskilling and retraining their workforce. Not only will this allow organisations to build the skills they need to stay competitive, but it will also allow them to retain talent by investing in employees’ professional development.

A focus on lifelong learning will also help to showcase the industry as a modern and rewarding sector to work in, which should help to pull in young people. UK manufacturers have a responsibility to promote this true image of the industry. We need to be showcasing the high-tech opportunities that exist within the industry if we want to inspire young talent.

Educational institutions also have a key role to play in plugging the skills gap. It’s important to start generating interest in manufacturing in schools starting from an early age.

For this to work, there needs to be collaboration between industry and the education system. The introduction of T-levels, the first of which launched this September, are a promising start. The content has been developed by appointed industry professionals and employers to ensure the skills being learned are relevant and in demand. By 2022, all T-levels including an Engineering & Manufacturing pathway are expected to be in place.

The manufacturing skills gap needs urgent attention. Plugging the gap will lead to higher levels of productivity and innovation, allowing manufacturers to stay competitive and to contribute to the UK’s economy.