From gloves to disused satellites: 129 million pieces of space debris 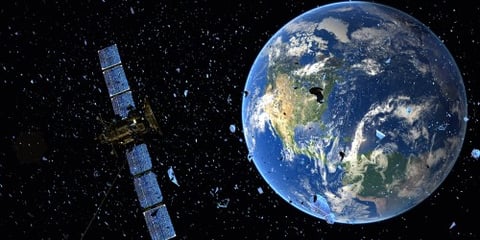 Bezos, Branson, Musk. No decent, self-respecting billionaire is content with holidaying in Malibu anymore. Space is the destination of choice. However, where humans go, rubbish follows. Unfortunately, hundreds of miles above the earth, we can’t put space debris in landfills, and anything that gets lost will float off and orbit the Earth forever.

How much space debris is there?

The European Space Agency (ESA) reckons over 129 million objects larger than a millimetre are orbiting Earth, ranging from astronauts' lost gloves to giant inactive satellites. The size of the debris is not important—but the fact that the tiniest piece of junk can travel up to 56,000 km/h in orbit is. What is the impact of space debris?

Today, everything and everyone is connected to the internet, and we rely on satellites orbiting the Earth for many things, including our mobile GPS, internet connectivity, and weather updates. Unfortunately, more items in space spells more danger for satellites. More frequent collisions create more space debris, a scenario known as the Kessler syndrome. And the fact space is becoming ever busier only compounds the problem.

Our reliance on technology and the potential impact of space debris colliding with active satellites means that we need to act—and fast. To help get started, the ESA appointed ClearSpace to lead the world’s first space clean-up mission, starting in 2025. ClearSpace is also tasked with testing technologies that will be essential in the future commercial plight to remove space debris.

Harpoons, tethers, nets, robotic arms, giant foam balls, solar sails, and puffs of air: a plethora of potential solutions have been suggested to remove space debris. However, in ClearSpace’s first mission, the company will use a four-arm gripper, roughly the size of a car, to capture, deorbit, and then dispose of the first piece of space debris. When the space debris has been captured, it will be taken to the Earth’s atmosphere, where it will burn.

The overarching concept behind future space debris removal is to target the largest objects from the busiest orbits as these are most likely to collide with smaller objects, causing a huge increase in space debris. With 6000 satellites orbiting the Earth (only half of which are functional), there is an ever-increasing risk of a disaster.

Removing large items of space debris is an important mitigation strategy; however, there is no current plan (or technology) to remove smaller items. Therefore, agencies actively track 28,000 space debris objects. The ESA is using laser tracking technology and AI collision avoidance systems to avoid disaster in space. Their laser tracking system is located on the side of Mount Teide in Tenerife and uses laser light that probes hundreds of kilometres into space to locate space debris to a near-precise location.

The pioneers of satellite technology didn’t worry about sustainability in space. However, sustainability is now at the forefront of our earthly and celestial concerns. Although the majority of newer satellites are either programmed to re-enter the Earth’s atmosphere where they incinerate or launch themselves to outer space where they cannot pose a threat, the race is on for manufacturers to develop sustainable satellites.

The Space Sustainability Rating, a World Economic Forum initiative currently being developed, will be a voluntary measure of satellite sustainability that will give manufacturers a rating based on factors including:

The rating will seek to act in the same way an ESG (Environmental, Social, and Governance) performance rating works. Who knows, one day the term might change to ESSG to include an evaluation of how companies treat space.

How can manufacturing help to clean up space?

Covid-19 made manufacturers reconsider their supply chains and ask themselves questions about the best model: offshoring, reshoring, nearshoring. The merits of each method are hotly debated; however, the general consensus is that there are definite benefits of creating products close to where they are going to market.

Danielle Wood, a professor at the Massachusetts Institute of Technology who leads the Space Enabled Research Group, believes that the future of satellite manufacturing might be spaceshoring (my term, not hers). We currently design and manufacture satellites on Earth and then send them to space. But the future could be manufacturing plants in orbit.

By using technologies such as 3D printing, we could build satellites in space. Not only would this reduce the costs of sending them into space, but it could also solve problems at the end of their lifecycle. Instead of being deorbited and burnt, space debris could be recycled. The satellites could be split into their modular parts or melted to create material for 3D printers, which then print new satellites—a greener manufacturing solution on Earth and in space.

Leave no trace in space

A very modern “tragedy of the commons” is taking place in space. We are polluting space the same way we pollute the seas. But while addressing this issue involves international cooperation and creating laws for the environmental protection of space, the best future solution would be not to generate waste in the first place. Preventing pollution is far easier and cheaper than having to deal with it retrospectively.

This is where future-thinking manufacturers come in. Developing technologies that allow space debris to be recycled and reused will be the key to winning the future space race.