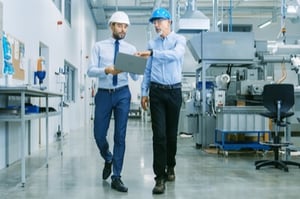 While uncertainty around Brexit, electronic component shortages and the skills gap continue to loom within UK manufacturing, there is still much to feel positive about.

The 4th annual EEF Manufacturing Fact Card, created in partnership with Santander and published in August 2018 , provides a snapshop of the latest data on UK manufacturing.

And it offers some much-needed reassurance that the sector is continuing to thrive, to stay at the forefront of technological change and to make a valuable contribution to the UK economy.

So what's changed in the last twelve months?

According to the EEF's latest findings, exports remain solid, with 45% of UK exports (worth a total of £275bn) originating from the manufacturing sector and the UK currently ranking 4th in the world.

Careers within the manufacturing industry also continue to pay well - with the average annual salary in manufacturing remaining consistently higher than the whole economy average .

Manufacturing pay - at £32,467 per annum - is £3,258 higher than the whole economy (with the exception of the City of London) and £4,188 higher than services. The highest annual average pay packet within manufacturing is currently earned by the high-skill transport sector at a yearly salary of £39,800.

Total employment has also seen a rise over the past twelve months, increasing from 2.6 million in 2017 to 2.7 million in 2018. There have, however, been declines in employment figures in some areas of the UK - most notably in Yorkshire and Humber (which has seen a drop of 26k to 267k), the West Midlands (down 18k to 305k) and Wales (which has declined by 9k to 147k).

Manufacturing output is on the up in every area, with the North West once again claiming the top spot as the region with the single biggest output. And the North West has also seen impressive growth, rising to 26.9bn.

But these regional successes have not been sufficient to prevent the UK from slipping back into its former 2016 position as the 9th largest manufacturing nation in the world. China continues to hold top position followed by the United States, Japan, Germany, South Korea, India, Italy and France.

In comparison with the rest of the world, however, the UK continues to rank strongly - holding 2nd position globally for service exports, 4th for overall exports, 9th for GDP, 10th for goods exports and 26th for GDP per capita.

The EEF's latest figures also show evidence of shifts between sectors. The top Research and Development (R&D) spot, previously held by the Chemicals and Pharmaceuticals sector, has now been overtaken by transport. The transport sector is also hot on the heels of food and drink, which currently ranks in first position as the UK's largest manufacturing sector.

The EEF's Chief Economist, Ms Lee Hopley sums it up:

"Our latest data continue to show that UK manufacturing punches above its weight in some vital areas of the economy and contributes more than the sum of its parts. This is reflected regionally, in productivity and pay levels, for millions of people working in the sector.

Hopley continues: “It provides an important reminder that we’re still one of the top ten biggest manufacturing nations and we want to see policy makers working with industry to help move UK manufacturing up the rankings.”